The Summer of 2021 in Minnesota brought turf managers the warmest median temperature on record for the state, coupled with well below-average precipitation. Properties with irrigation failures showed alarming results in a very short period of time. Use of Sustane Soil ReGen and Sustane 4-6-4 provides startling results in record time.

1. In treatments 1,3,5 quality of grass is comparable until 6 WAA after which the untreated 5 dropped significantly.
2. Quality of the cored plots (2,4,6) differed from 2 WAA with the treated plots gave significantly better quality.
3. Recovery from coring is much better in the Sustane treatments (2 and 4) compared to the untreated 6. 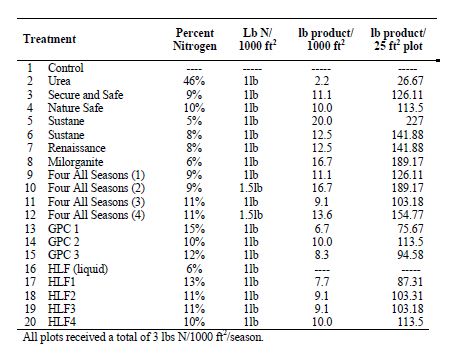 The purpose of this trial was to evaluate nitrogen (N) release from several experimental, natural organic fertilizers and to compare them to industry standards. This trial was located at the Iowa State University Horticulture turfgrass research station near Gilbert, Iowa. 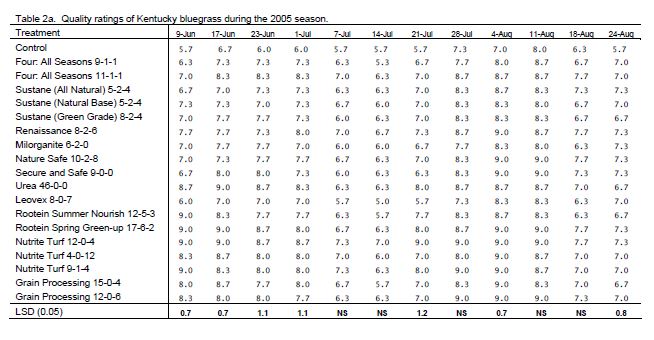 The objectives of the 2005 nitrogen (N) source study were to compare the turf response and N release rates of various experimental fertilizer products being proposed for marketing to a number of industry standards, such as Milorganite, Sustane, Nature Safe, Corn Gluten Meal, Renaissance, and urea. An untreated control was also added for comparison. The research was conducted at the Iowa State University turfgrass research area north of Ames, Iowa on Nassau Kentucky bluegrass turf.

The objective of this study is evaluate the effects of different natural organic nitrogen sources on Kentucky bluegrass growth.

, College of Agriculture and Life Sciences, 1992

This is a 3-year study, which started in June 1994. The major objectives are to evaluate some turfgrass amendments or conditioners and compare them against a traditional synthetic treatment on turfgrass plots.
Specific effects being examined include:

1)Effects on turf quality and esthetics in terms of functional features (colour, density, and general appearance) 1994-1996

2) Effects on turfgrass disease control such as dollarspot and snow mould: 1995-1996.

Benefits claimed by manufactures of organic fertilizer include reduced disease activity, reduced thatch buildup, thatch reduction, reduced soil compaction and reduced nitrate movement. However, investigation of these claims first requires an understanding of just what can be called a “natural organic nitrogen fertilizer.”